Ducks all in a row

We've had some technical difficulties lately...so if you're wondering about the giveaway for the black walnut cutting board, we've extended it so you still have time to participate! We'll pick a winner on Friday, May 18th...just check out the blog post from Earth Day for details.

We have once again increased in numbers on our farm-this time by fifteen in one morning. We just got ourselves fifteen fabulous ducks! 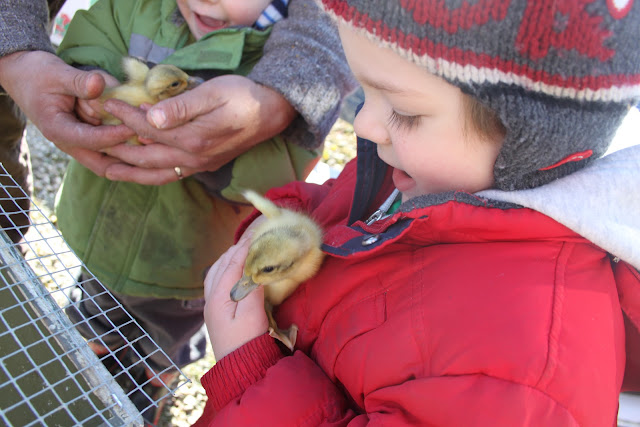 Our friends always ask us what we do with ducks...all they can picture is 'Duck Confit' ! We explain that we have them for eggs and that ducks eggs are even better tasting than chicken eggs...or so we've heard! We haven't actually tasted a duck egg because none of our past ducks ever got to the egg laying stage...allow me to digress...

Last spring, our good friend Daina gave us two newborn Indian Runner ducklings.
There's really nothing cuter than a duckling, and we were smitten! Daniel named them Nemo and Peep, and they became like members of the family. We kept them under a heat lamp until they were big enough to be outside, and then they moved outdoors to a pen where they stayed at night. 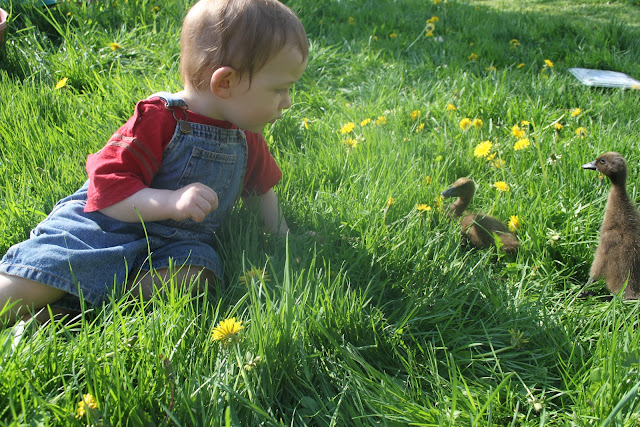 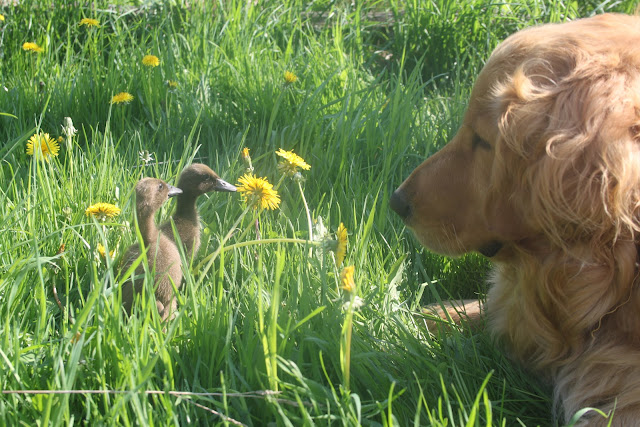 They hung out with Tucker, our Golden Retriever, like they were the same species. In the day they were always on the move, necks craned forward, earnestly marching around the yard with their waddling gait. They followed us down the lane to the mailbox, they stuck right with us when we built a snowman...they were a constant source of entertainment as they insisted on following us everywhere we were outside, always quacking up a storm. They thought that they were part of our flock...Nemo was the head drake and he always let us know it! We were looking forward to Peep finally laying eggs this spring, as she would be fully mature by then. 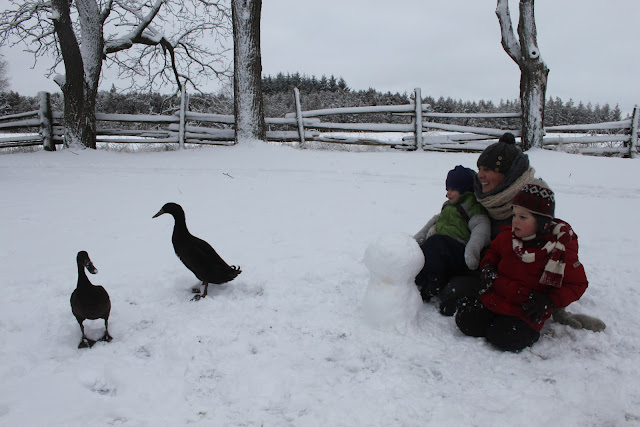 Tragically, a mink somehow broke through the side of their pen and killed them both this past January. We were so sad-those ducks were such characters, and we loved having them around. We had six chickens last summer, which were great for eggs, but we realized we liked the personality of the ducks much more than the ornery, poop-happy, ready- to -peck- at- anyone- chickens. We got rid of the chickens because they terrorized the ducks, always pecking at them, and so Nemo and Peep had a couple of peaceful months before they died their tragic deaths. RIP Nemo and Peep-we'll never forget you.

We needed to get ourselves some more ducks! Early Sunday morning we all piled into the car and headed off to Mount Forest, where they have an annual event on their outdoor fairgrounds called 'Fur and Feather'. Picture a giant tailgate party, but without the beer...instead, each pickup truck or van hosts a collection of crates and boxes filled with all manner of furred and feathered creatures. It was quite the sight to behold, and definitely something you'd only find in a rural setting. We pulled up at 8:30am and there were already hundreds of people there vying for their animals of choice. 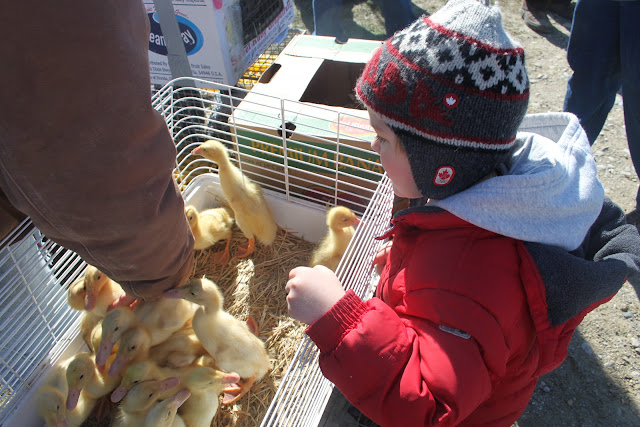 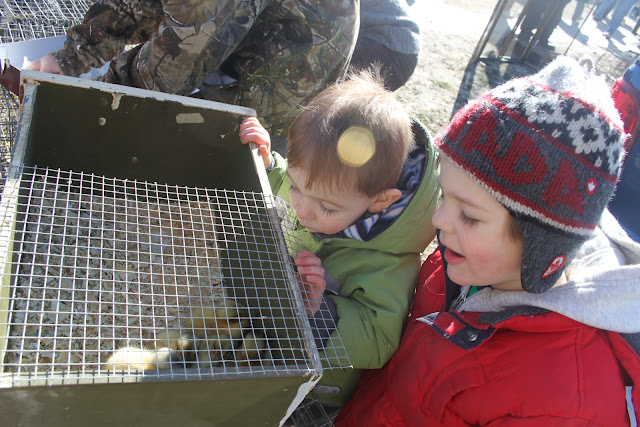 The boys had the best time picking them out, and we packed them up in some boxes and brought them home. 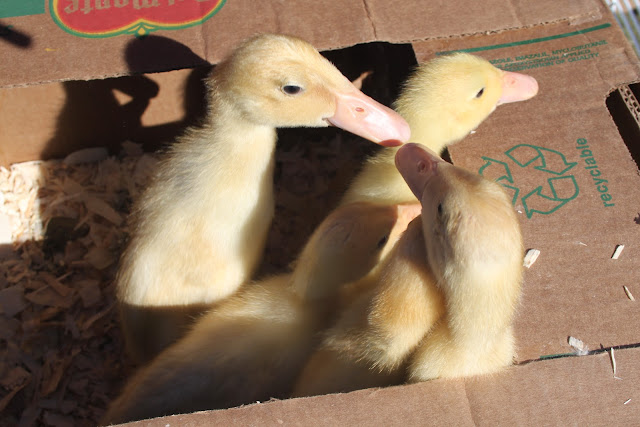 Before we left, we checked out some of the other livestock... 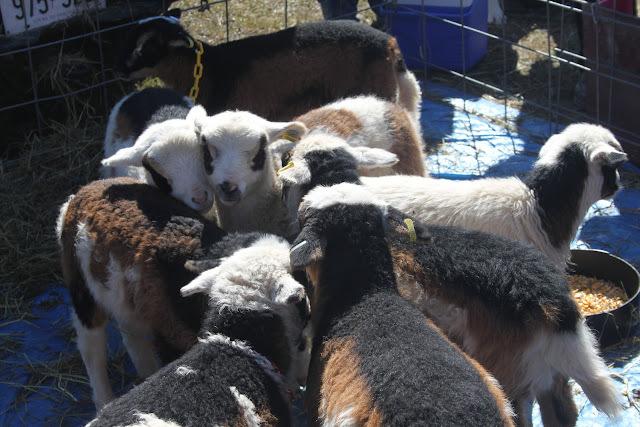 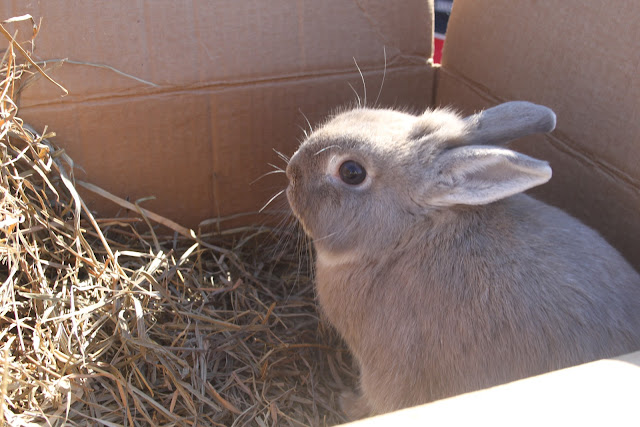 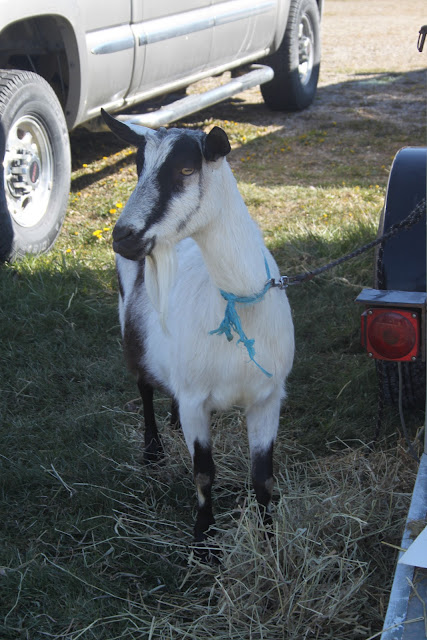 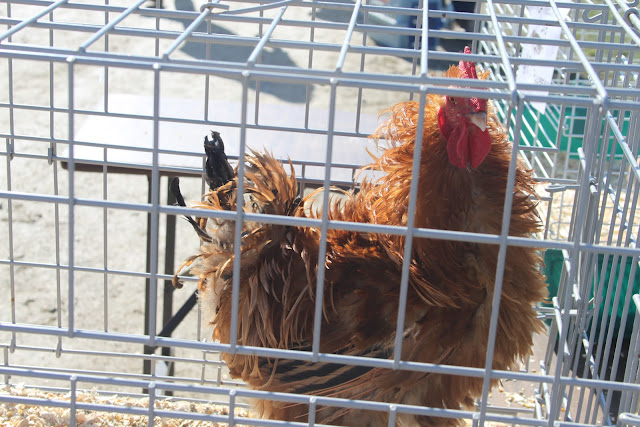 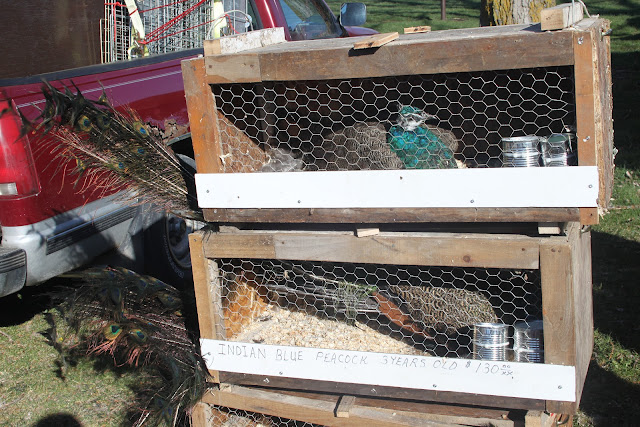 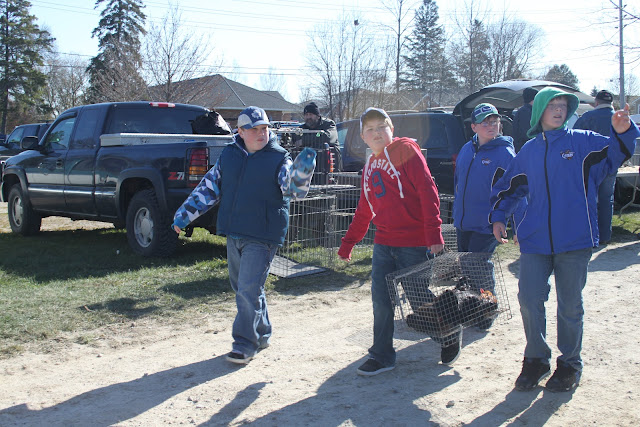 We brought those ducks home and they got settled in their pen. We put the older ducklings with the two adult females and put the smallest ducklings inside the house in a Rubber Maid container under a heat lamp. 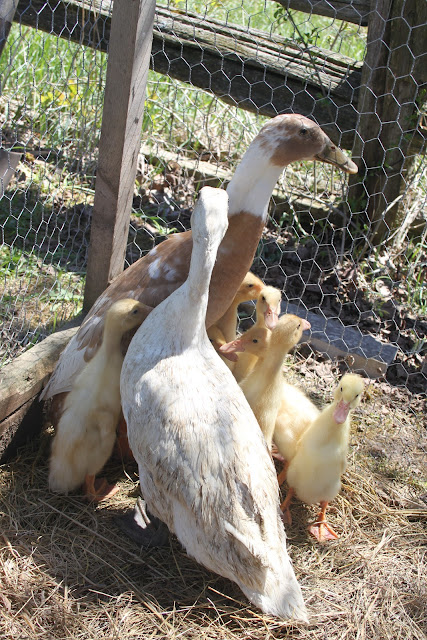 It didn't take long for them to get comfortable with each other! We decided to call the white adult female Jemima Puddleduck, like the duck in the Beatrix Potter tale...this was Daniel's idea, of course. The tan and brown one we decided to call Mamasita, as she looks like a spicy little mama.
Welcome home ducks...we think you'll like it here.
And as Daniel says, we're gonna catch that mink and make a fur coat for grandma, so no more ducks have to die. Trying to picture my mom in a mink coat... 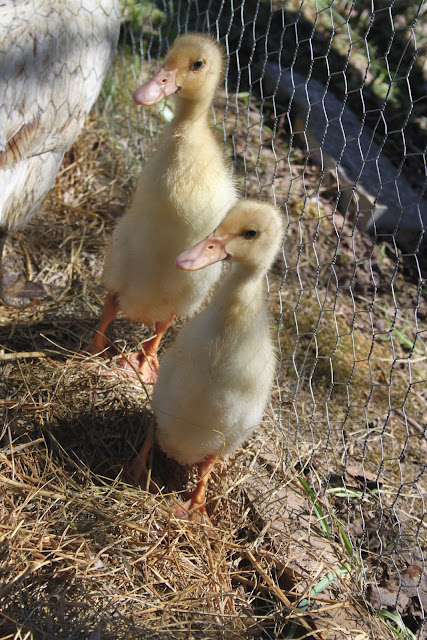 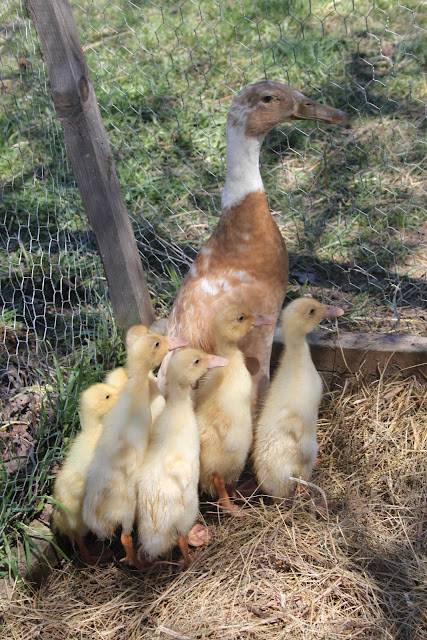 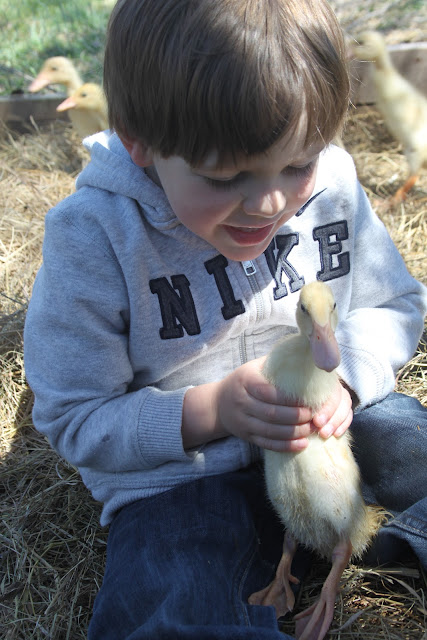 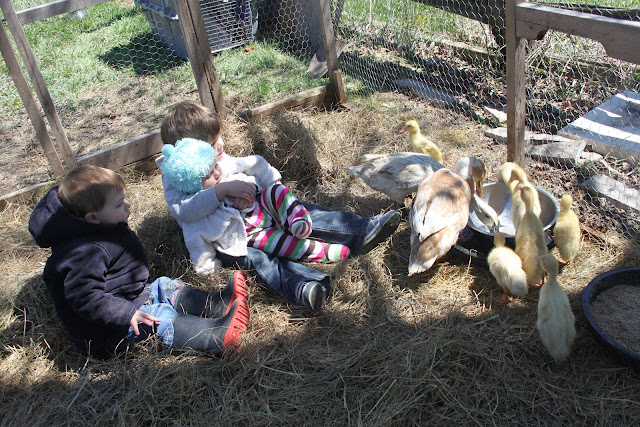 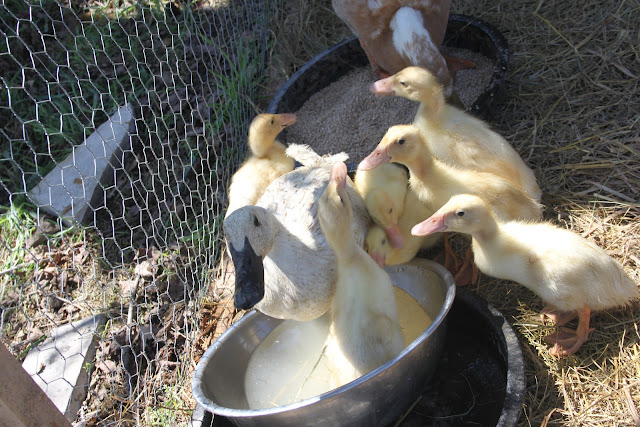 Email ThisBlogThis!Share to TwitterShare to FacebookShare to Pinterest
Labels: Elijah with Nemo and Peep