Getting in the garlic!

Our summer was full of unexpected hurdles-moving houses, digging and planting a whole new garden & then a serious drought-we didn't have rain for over ten weeks straight!

It meant Andy taking a bunch of ten gallon jugs to the lake every other day, filling them with water and then hand-watering the garden at night after work. Suffice it to say that the garden was way more work than we'd been expecting this year-but now that the harvest is almost all in, it's all worth it.

I have lots of catching up to do as I haven't posted here for such a long time...now it's October and it's high time to plant our garlic. 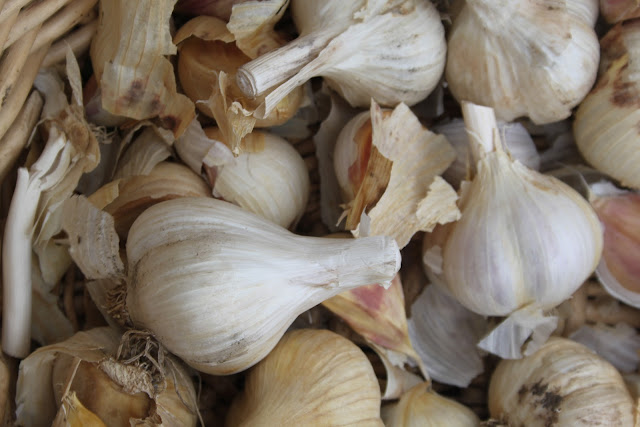 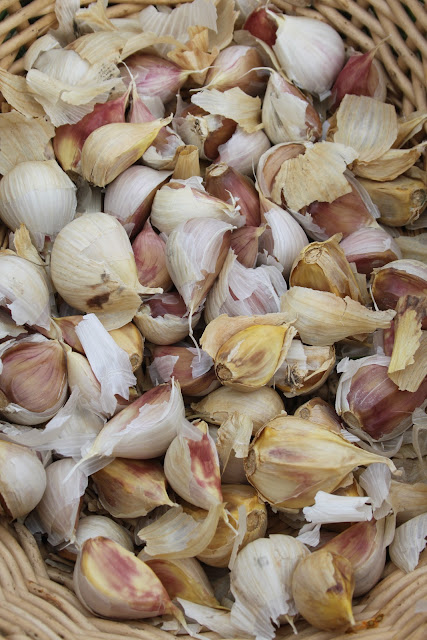 Look at these giant, beautiful cloves! We didn't have our own garlic, so I bought a bunch of organic garlic from the farm I work at part-time, Everdale Organic Farm.

We haven't planted garlic before, so we researched the best methods for planting. It's best to plant in the fall, about a month before the ground freezes-so we picked a sunny fall day and made it happen! 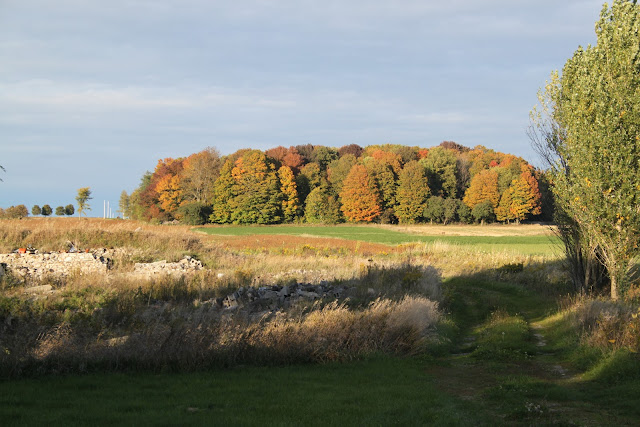 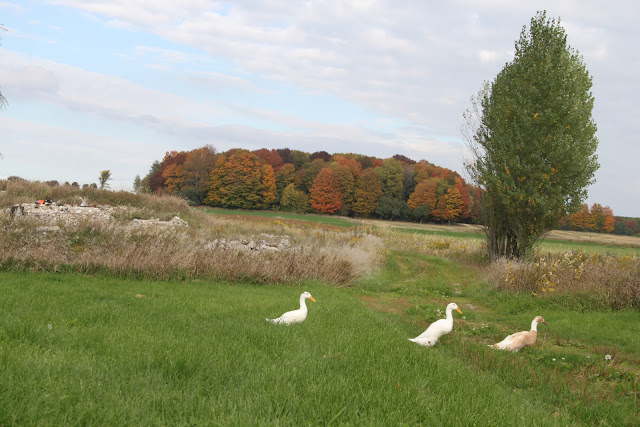 I got the kids to help me out. They got mildly excited about breaking the cloves apart; the promise of a treat after also didn't hurt...except for Lily. I don't need to bribe her yet. She just likes doing anything her big brothers are up to. 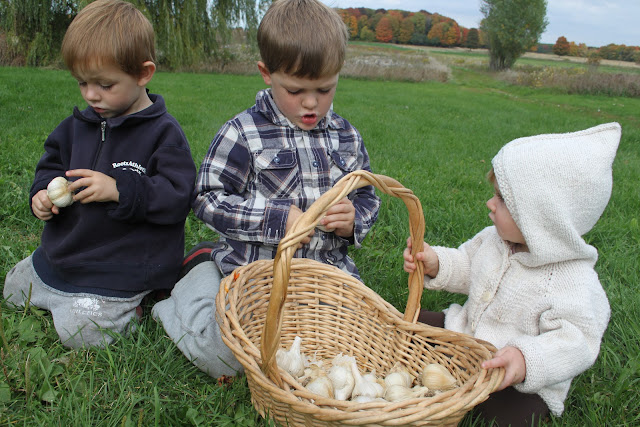 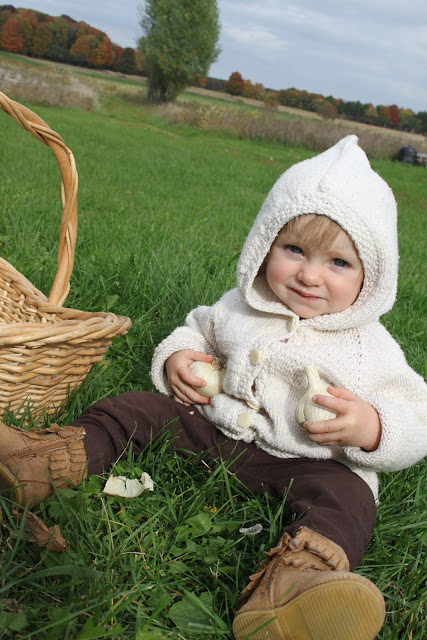 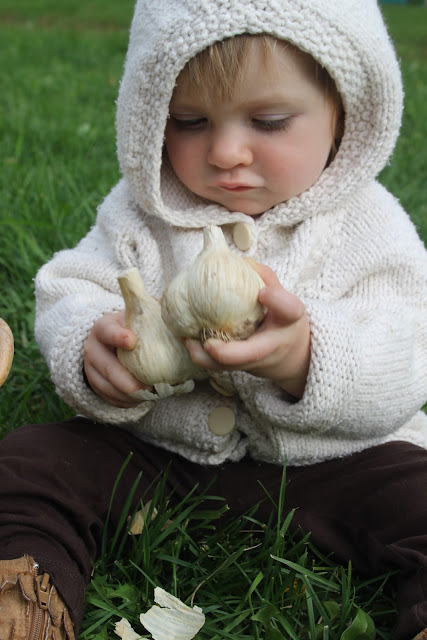 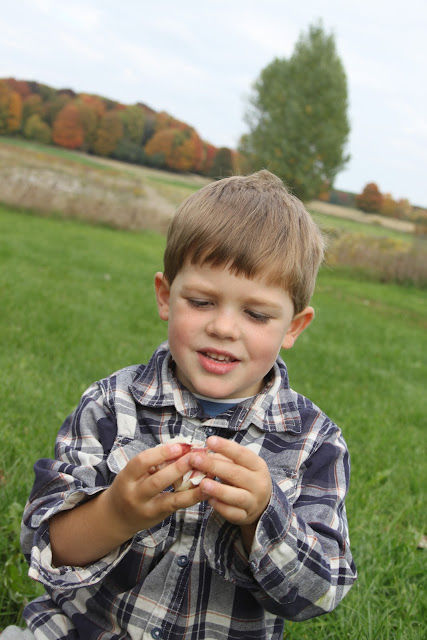 I dug over a couple of rows that were empty, and we started planting them-about 6 inches apart, blunt end first, and about 2 inches deep. 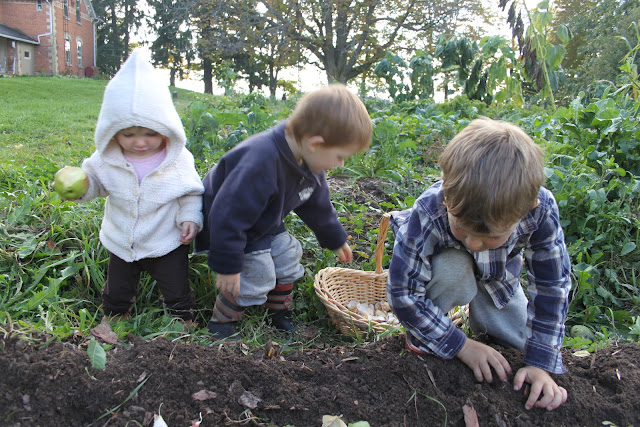 The kids actually got into the planting part-we said we were putting the little garlic 'men' to bed with their pointy stocking caps pointing up, and their round bums down...of course much hilarity ensued every time the boys said 'bum'...over and over again! 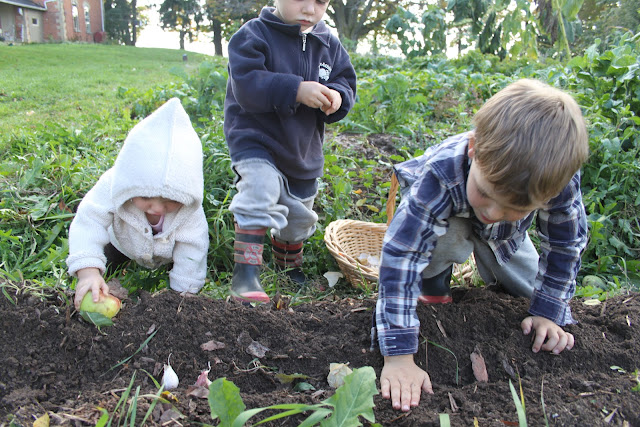 Lily tried to plant her apple. 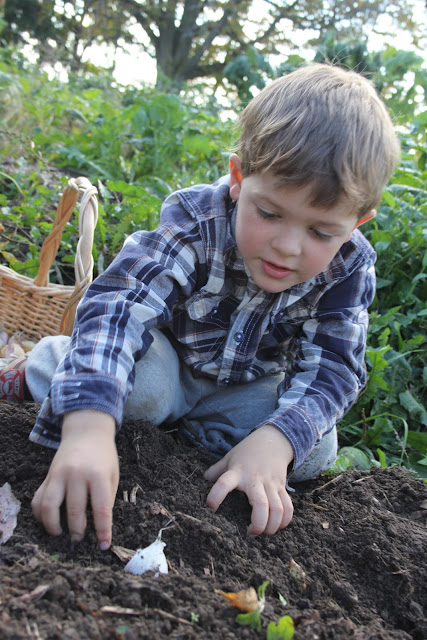 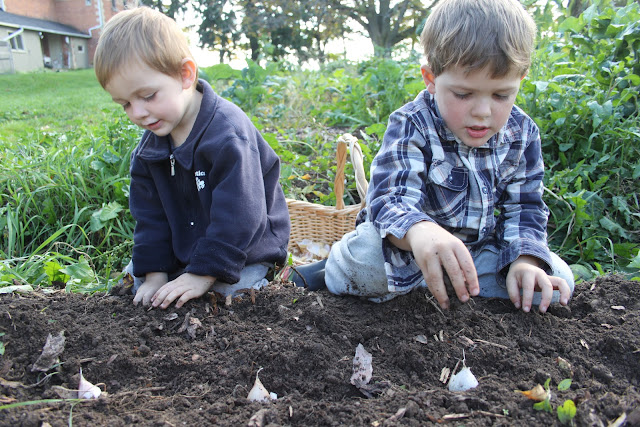 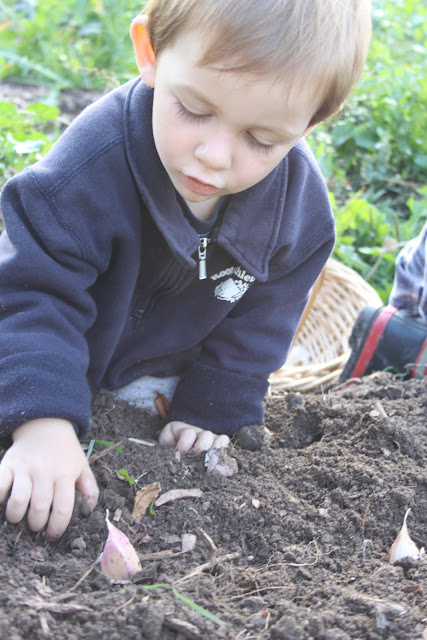 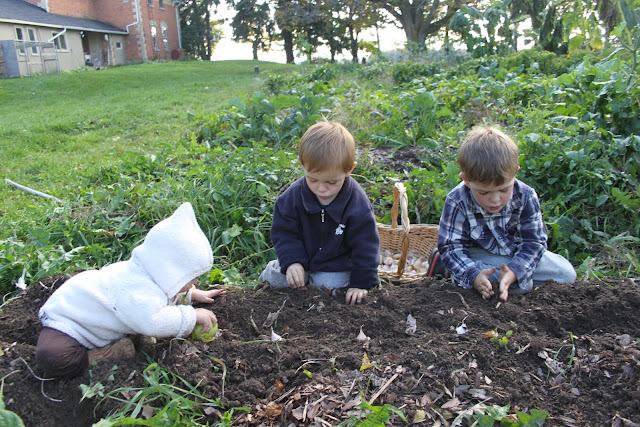 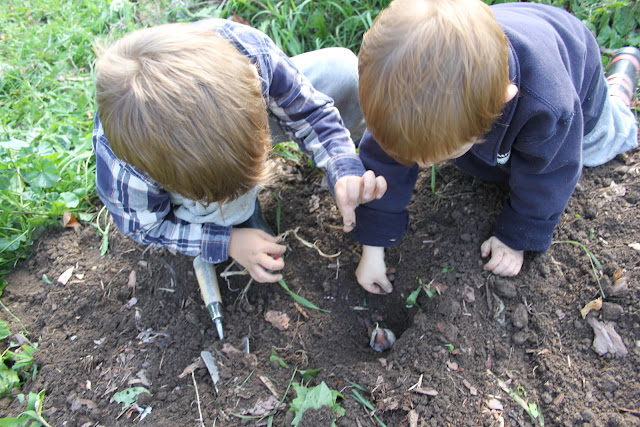 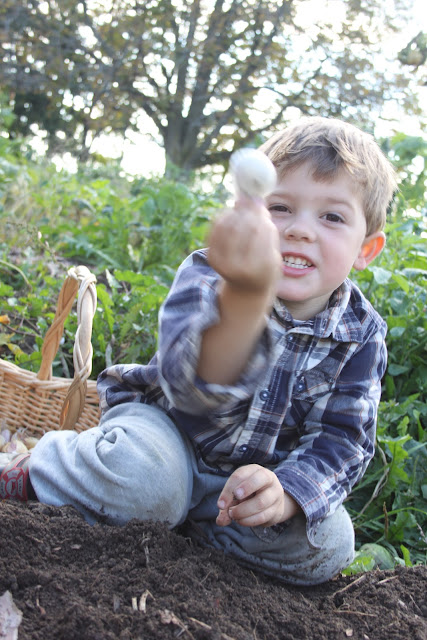 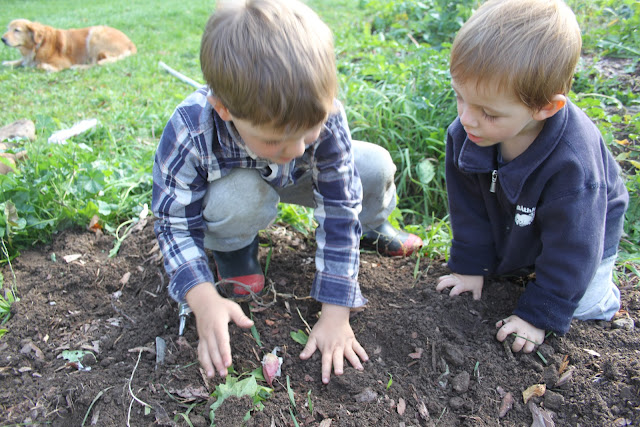 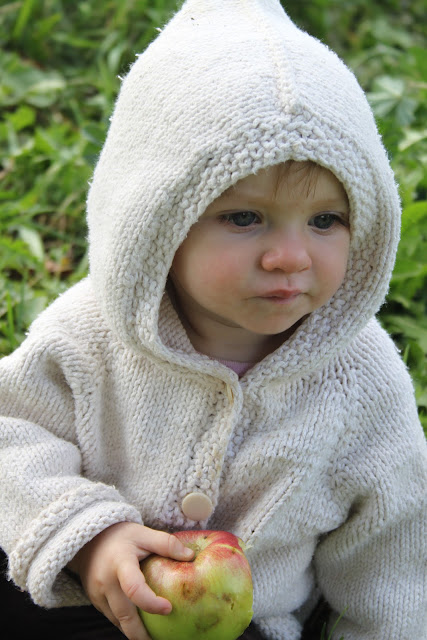 Apparently Lily found it all very tiring, so she decided to have a wee nap while the boys were finishing up. 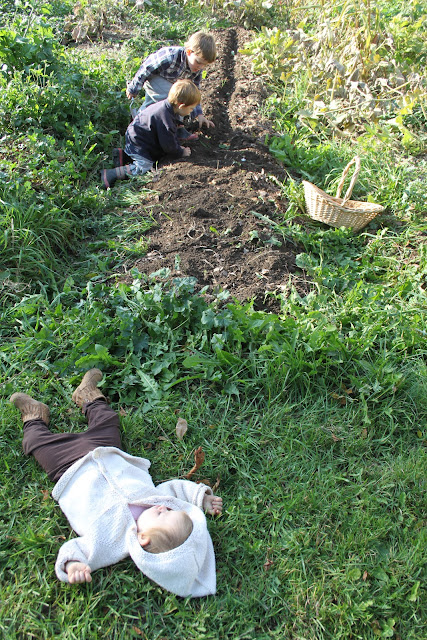 Now if she would only nod off so quickly at night time!
﻿ 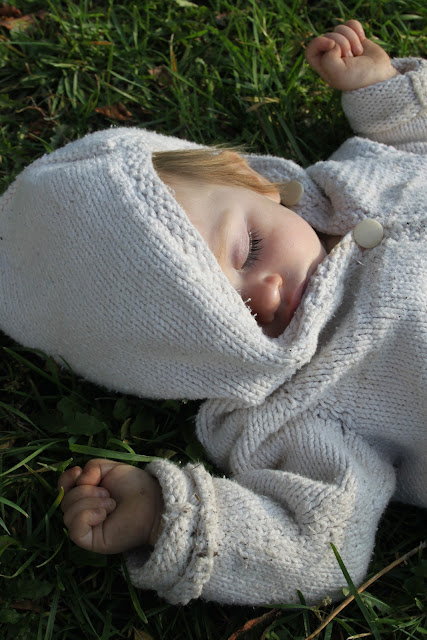 The last step is covering the row with mulch, which helps to protect the garlic from freezing while it's napping through the winter. We used organic pine bark mulch that someone gave us, but you can use a thick layer of straw or leaves. You can also layer on some compost in the fall before you add the mulch, or you can add it in the early spring. As our compost still has some decomposing to do, we'll remove the mulch in the spring, add some compost, then put the mulch back on again. We'll leave it on all summer to help the soil stay moist and encourage earthworm activity. We'll just make sure all the new shoots can poke their heads through the mulch.﻿ 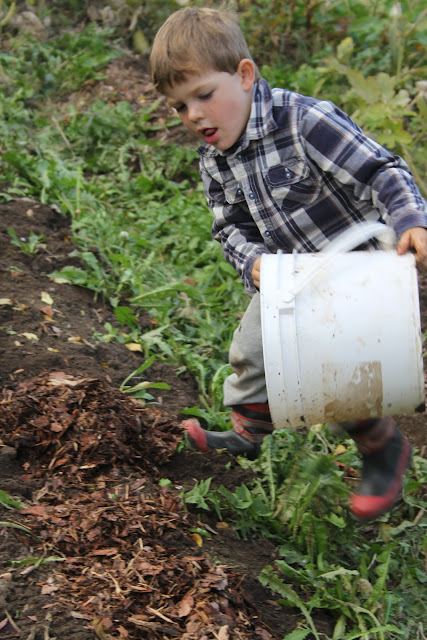 Daniel actually really got into filling the bucket with mulch and dumping it-he told me " This isn't boring anymore, Mom. This doesn't feel like work-it's fun!" Kids-go figure. The part of the job that I thought would be the hardest for the kids was the most fun for him. This could bode well for the future. Maybe I'll let him take over next time and I'll join Lily- and the little garlic men- for a siesta! 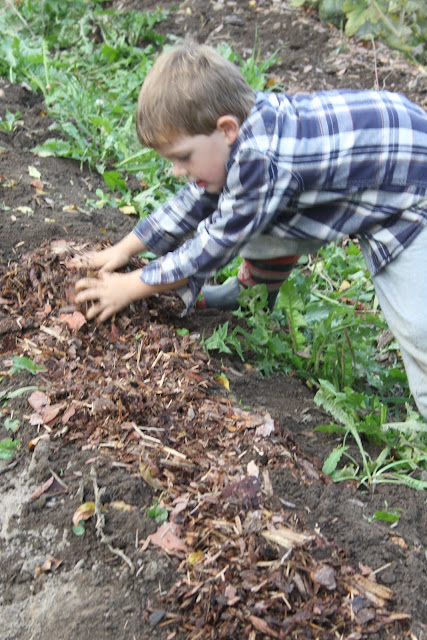